Your mobile phone is meant to be an extension of productivity while you’re out of the office, but some people can’t resist the urge to mess around with the numerous entertainment applications right in front of them. Unfortunately, nowhere is this more true than in the office. What’s that? Your employees don’t waste time with mobile devices? Withhold judgment until you see the statistics. Your people might be wasting more time than you think.

According to a study by The Nielsen Company, the average person spends almost two whole days every month using their mobile devices. The statistics were gathered with Nielsen’s mobile app tracking application, which examines information collected from the fourth quarter of 2014 from 5,000 iOS and Android devices, with users aged 18 or older. 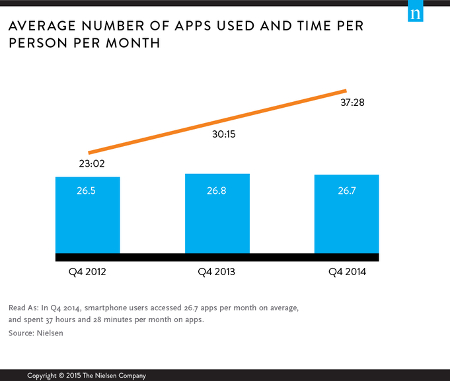 As shown by the statistics, the average amount of time someone spends on their smartphone has drastically increased over the past three years. Of course, 2015 is a new year, but these statistics likely won’t improve. If anything, they’ll increase to exceed the all-important 40 hours. How much money would you lose in a year if every single employee at your office were to get paid one week for doing nothing? This is the cost of smartphone lethargy, and it can be significant.

According to the survey, these are the three top time-wasters on mobile devices: games, music, and videos. 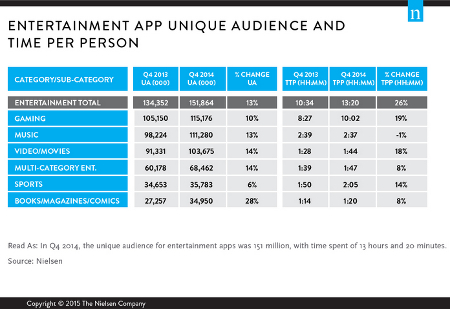 Once again, we have to say that the fault for this problem doesn’t lie with the smartphone; rather, the employees using it are the ones abusing the privilege. If your business is supplying them with technology to be more productive, it’s insulting that employees would use that technology to waste time rather than get more work done. Somehow, there has to be a way to minimize the amount of time your employees waste on their device in the workplace.

If this is what you’re looking for, Ferrum Technology Services has just the solution. With a mobile device management solution, you can take advantage of whitelisting and blacklisting applications from accessing your company’s network. This helps you minimize the amount of time your employees waste on games and other distractions, as well as minimize accidental data leakage. For more information, give us a call at 847-697-3282.

Facebook Twitter LinkedIn
Tags:
Productivity Mobile Devices Smartphone
Tip of the Week: How to Knock the Socks Off Your A...
What Happens to a Hard Drive When It’s Stored Away...

More posts from author
Wednesday, July 08 2020 Tip of the Week: How to Switch Microsoft Word to Dark Mode
Monday, July 06 2020 What’s the Best Antivirus for Businesses?
Friday, July 03 2020 3 Technologies Your Business Can Use Right Now
Wednesday, July 01 2020 Why Overworking is a Serious Issue for Your Remote Workers
Tuesday, June 30 2020 Technology Can Help You Ward Off Recession